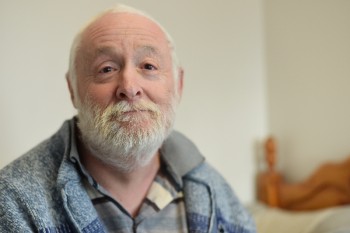 Brian is 64 years old. He is cheerful and courteous. He doesn’t drink alcohol or take drugs, he never has. And he has been homeless for 11 years.

For years Brian cleaned cars at a car auction in Chelmsford. He enjoyed his job. When he was made redundant, Brian contacted his local council to claim housing benefit. He believed that his claim was in place but after several months he received a bill for over £2,000 from his landlord for rent arrears. Brian was out of work and unable to pay the debt and so, at the age of 53, Brian became homeless.

For the following 11 years Brian slept in parks and on benches. For a short period he was able find a room but as time went on, mobility issues meant he could no longer climb stairs and again he was forced onto the streets.

Brian first came to the attention of Stonepillow in September 2015 when he fell over in the street in Littlehampton. He was offered accommodation at Stonepillow Lodge, which acts as Stonepillow's hospital discharge facility and for those who, like Brian, would be unable to stay in a more traditional hostel environment due to their health needs.

Brian has flourished during his time at the Lodge, with our help he is seeking medical assistance for his mobility issues and receives support from a team of carers. He is also attending a day centre in Chichester for people of retirement age which provides him with a valuable social network.

Stonepillow continues to work with Brian to help him find long term supported accommodation where he will be able to continue to gain the help and support that he so desperately needs. With the support of Stonepillow, Brian will never again have to sleep on the streets.