Laura steps up for Stonepillow! 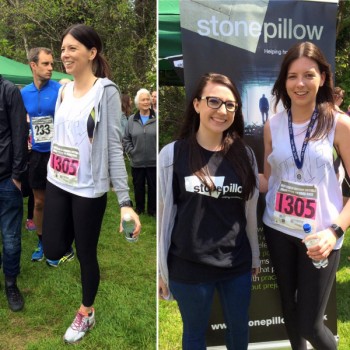 “You could do that!” my colleague said, when we heard that Stonepillow had been selected by the Rotary Club of Bognor Hotham, as their charity for the Bognor Prom 10k Road Race 2016.

Working for Stonepillow means that I see first-hand just how much difference funds raised by our supporters makes to some of the most vulnerable people in our community. I entered the race as a personal challenge as well as to raise funds for the charity.

I had never run before so I started training in January. In the first week, I couldn’t even run 2km. By week 5, I had completed a full 5km and by week 14, I was able to run 9km. By race day I figured I was as ready as I would ever be and joined hundreds of participants as we gathered at the Bognor Prom 10k HQ for a warm up session. I felt a mixture of nerves and excitement as I stood amongst the crowd waiting for the klaxon to sound and I was pleased to have my uncle, who had agreed to run with me, by my side.

Family and colleagues were there to cheer me on. Supporters lined the streets in Bognor, waving and cheering from outside their houses, on balconies and in driveways. The atmosphere was electric and I was determined to run the whole 10km without stopping. I ran the first 6km at a steady pace but as we turned a corner along the promenade the wind was fierce making the last 4km difficult.

As I hit the finish line a combination of relief and elation overwhelmed me. Months of training had paid off. I had done it, I had ran the whole way! I raised just under £500 for Stonepillow and knowing that my sponsorship money would make a difference was a tremendous feeling.

Thank you to family, friends and Stonepillow supporters who sponsored me and to the Bognor Hotham Rotary club who organised a fabulous event.

Perhaps this finish line will be just the start!