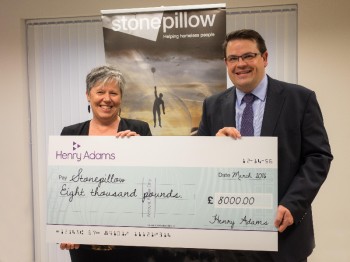 A successful partnership between Stonepillow and Henry Adams has culminated in a grand total of £8,000 being raised for the charity.

“This is a fabulous amount which will make a real difference to people’s lives,” said Sylvie Johnston, Chief Executive of Stonepillow. “We really appreciate all the tremendous fundraising efforts from the staff at Henry Adams. Their support has meant a great deal to us all and has certainly helped raise the profile of our work.

“The icing on the cake was that Martin Curry and his colleagues have been great fun to work with - they were game for all sorts of hardships including taking part in our Big Sleepout which was a huge success and won the 2016 Observer Community Award for Best Community Event.”

As sponsors of the event, fifteen members of staff from Henry Adams, including senior partners, were among the 140 people sponsored to spend the night under the stars in cardboard shelters they had to make themselves during the day. The event was the most successful Sleepout ever, raising in total more than £16,000. Other events by Henry Adams staff included a 53 mile tandem bike ride around new homes developments across Sussex and Hampshire.

Martin Curry, partner at Henry Adams leading support for the charity, said, “We have thoroughly enjoyed working with such a great group of people at Stonepillow. To see the impact of the charity in assisting vulnerable people who don’t have a home, when most of us take a roof over our heads for granted, has been humbling and inspiring.”

“Stonepillow does a really outstanding job supporting people to get back on their feet and I’m delighted that our efforts will go some way to helping them continue to carry out their excellent work.”

Anyone wishing to donate to Stonepillow is welcome to do so at any of Henry Adams’s offices where they will be holding collection boxes until the end of March. For their locations, visit www.henryadams.co.uk.